Everyone can perform creative thinking, yet only a few come up with ideas that can dramatically change the world. Emergent technologies like Artificial Intelligence can help humans to fully unleash their creative potential.

Everyone can perform creative thinking, yet only a few come up with ideas that can dramatically change the world. One of the reasons for this is that human cognition is highly biased by preconceptions about the world which prevents most people from thinking outside of the box. These preconceptions are so deeply rooted in the human mind that most people are unaware of their existence, not to mention strategies to overcome them.

Creative cognition is a sub-field of cognitive psychology that aims to: (1) study the cognitive mechanisms involved in creative thinking, and (2) develop techniques to unleash one’s creative potential. I am writing this post to unfold the principles behind creative cognition, with a particular emphasis on design. I have been studying this topic to explore how emergent technologies like AI could help humans avoid fixation in creative thinking.

In 1992 Finke published ‘Creative Cognition’, a book that established a new field in cognitive psychology. The theoretical foundation of the book is the ‘Geneplore Model’. The term ‘Geneplore’ is a combination of the concepts ‘generation’ and ‘exploration’, which represent the main stages of creative invention. Generation refers to the synthesis of what Finke calls ‘preinventive structures’, i.e. objects which do not yet exist, but that appear interesting or valuable. Exploration involves assigning meaning to these objects in order to produce something useful.

It is worth noticing that generation can be less constrained than exploration. Indeed, the objective ‘producing an interesting object’ is highly ambiguous.  This allows one to generate a wide range and diversity of preinventive-structures, thus leading to higher chances to come up with a creative product when the subsequent exploration stage unfolds.

Constraints relaxation assumes a pivotal role in Finke’s argument and challenges the mainstream approach adopted in design problem-solving named ‘form-follows-function’. Within this approach, generation is limited by a large set of constraints that direct the design process towards the synthesis of the most satisfactory solution. This approach is systematic and thus easy to model with computers. Modern CAD software is based on this approach: the designer starts by identifying the constraints of the design problem, and thus constructs a design space that can either be explored manually or automatically with the aid of optimisation algorithms.

To overcome the definition of over-constrained design spaces, Finke proposes an alternative approach named ‘function-follows-form’. It can be summarised as follows: generate a wide range of preinventive structures which satisfy only a few requirements; then explore these structures by evaluating their usefulness against the full set of requirements. Constraints can also be utterly ignored during the generative stage and reintroduced later when several structures have already been generated. This process, which can be assimilated to ‘expertise suppression’, has the potential to overcome conventional mental sets. 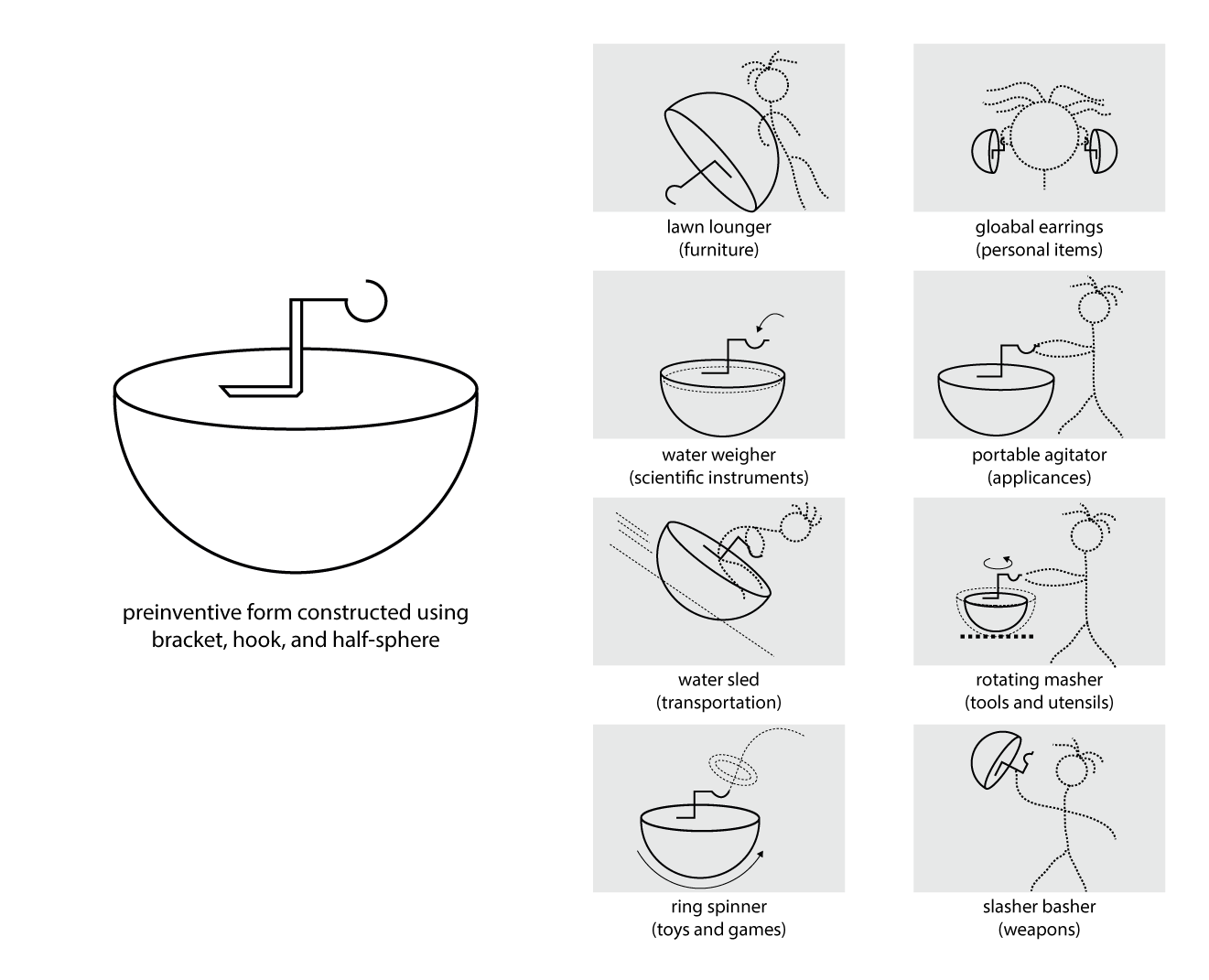 The function-follows-form approach may have important implications for future developments of AI-based design systems. Rather than using computers to search for a solution in well-defined design spaces, new design systems could support designers in both stages of generation and exploration. This could be achieved by encouraging playfulness, which translates into more interactive uses of design systems. The direct consequence of this interaction is that computers won’t be in charge of the whole design process, but will actively collaborate with designers.

AI could be used to generate preinventive structures that have at least some of the attributes that Finke believes necessary to produce a creative product. Among these, ambiguity and meaningfulness appear the most relevant.

The ambiguity of a preinventive structure allows multiple interpretations, which in turn can lead to the discovery of new properties during exploration. This property appears extremely helpful during the design process. Designers make extensive uses of ambiguous forms of representation, such as sketches, to externalise an idea and infer new meanings from the imagined object. Despite this, current CAD systems do not support ambiguous representations, offering instead a means to elaborate fully defined design solutions. For this reason, the use of computers does not support conceptual design. Conversely, new AI techniques can manage representations at different levels of abstraction. AI-generated ambiguous structures can stimulate the designer’s imagination and provide the basis for a continuous exchange of ideas between humans and machines.

The Geneplore model demonstrates how creative cognition can be significantly enhanced by adopting a less constrained approach during the early stages of the design process. However, even within this approach, creative cognition could suffer from recurrent mental sets. For example, the generation of a preinventive structure can be conditioned on expectations about the possible uses of an object, well before the exploration stage unfolds. This effect cannot be deliberately inhibited through strategies like constraints suppression, but only be softened.

However, we could now take advantage of AI to empower our creative potential.  The integration of AI in the design process is meant to add a secondary ‘reasoning system’ which relies on a knowledge base but is unbiased by human preconceptions. Interfacing with the system could be seen as a ‘design conversation’ in which each part – the human and the machine – alternate in both stages of creative invention. ‘Conversing’ with AI about design may open new possibilities that will arise because of the ‘cultural differences’ between artificial and human intelligence.